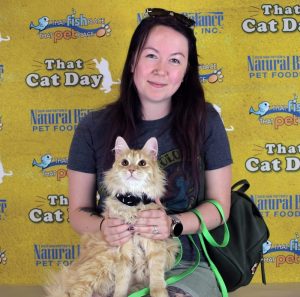 Cerebellar hypoplasia, sometimes called wobbly cat syndrome, is a congenital condition in cats that is neither contagious nor progressive.

It occurs most commonly when a pregnant cat becomes infected with feline panleukopenia, virus and it passes to her unborn kittens. It can also be caused by trauma to the unborn kittens, malnutrition during pregnancy, or other inflammatory conditions contracted by the mother.

CH affects the cerebellum of the kittens, which is the area of the brain that controls fine motor movement, balance and coordination. The affected cats often have noticeable symptoms from birth, which range from mild signs of head bobbing and high stepping to more severe signs like tremors and the inability to walk. The condition may not affect all kittens within the same litter. Of those kittens that are affected, their symptoms may vary greatly between littermates.

Diagnosis is often made by excluding other causes of the symptoms using routine laboratory testing such as blood work or x-rays. Sometimes advanced imaging such as MRI is used to determine the size of the cerebellum and confirm it is underdeveloped.

Cats with this condition can and should be spayed and neutered. Cerebellar hypoplasia does not make these procedures riskier.

They should always be indoor only with no access to stairs inside to prevent injury. They are less likely to be able to defend themselves from predators if left outside.

CH cats require larger litter boxes to accommodate their condition. Many have normal litterbox habits but some require a little extra help.

They often need extra traction such as mats or carpet to help them maneuver around. Cats and kittens should not be declawed as they rely on their claws for stability and balance.

A common misconception is that these cats may be in pain. Cats and kittens with CH can lead a very normal, happy, and healthy life. It does not affect their life expectancy and many adapt exceedingly well to their disability. If you find yourself lucky enough to welcome one of these lovely cats into your life we would love to partner with you in their care.