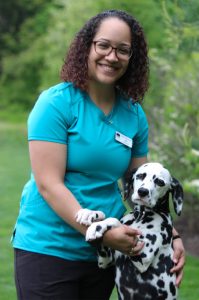 Today, it isn’t uncommon to know someone who has diabetes; but similar to humans, cats and dogs can also be diagnosed with this disease. Did you know that Diabetes Mellitus occurs in female dogs twice as often as males and most dogs are diagnosed between the ages of 7-10 years, whereas most cats are typically diagnosed around the age of 6 years and older?

So, what is Diabetes Mellitus exactly?

Diabetes is an endocrine disease in which the body can’t use simple sugars (known as glucose) to produce usable energy for the body. This could be due to the lack of insulin  being produced (Type I) or insulin resistance (Type II). Insulin controls the level of glucose in the body by transferring the sugar from the bloodstream to the cells. The cell then utilizes the sugar for energy. When there isn’t enough insulin being produced, or the body is unable to use the insulin, glucose begins to accumulate in the bloodstream in excess quantities causing hyperglycemia (high blood sugar). The sugars bind with water molecules which are then excreted in the urine causing the common signs of polyuria (increased urination) and subsequent polydipsia (increased thirst). As mentioned before, glucose is the body’s main energy source. When the body is unable to move the glucose into the cells for energy, the body essentially starves. If this starvation of energy is left untreated, the body breaks down its own fat and muscle tissue causing weight loss, which is also known as metabolic starvation.

The good news is diabetes is a treatable disease! However, it requires more regular examinations for your pet by your family veterinarian. To ensure that your furry companion is staying healthy, they will need more frequent blood and urine tests to closely monitor their diabetes. Treatment includes regular insulin injections, blood sugar testing and close monitoring of your pet’s urination, drinking, appetite, and weight habits. In addition to those treatment options listed, a special formulated diabetic diet may be added in with your pet to aid in the management of their diabetes. Despite being a fairly simple disease to understand, each pet is different and has variables that can make management complex. Working closely with your veterinarian is the key to obtaining the best control of diabetes in your pet.