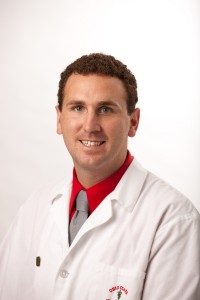 Dr. Sloyer performs the Tibial Tuberosity Advancement Technique for dogs, especially dogs over 60 lbs in weight. This procedure involves an osteotomy and metal implants. The dogs return to normal function more quickly and the success rate is higher than the lateral suture in larger dogs. However, both our surgeons continue to perform the lateral suture technique for small, medium, and large dogs.

Tibial Tuberosity Advancement is an orthopedic procedure to repair deficient cranial cruciate ligaments in dogs. This procedure was developed by Dr. Slobodan Tepic and Professor Pierre Montavon at the School of Veterinary Medicine, University of Zurich, in Zurich, Switzerland beginning in the late 1990s. 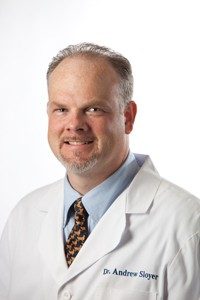 It stabilizes the knee joint, called the stifle joint in quadrupeds, and limits the tibia from sliding forward in relation to the femur.

It is attached to the cranial (anterior) medial side of the intercondylar notch of the tibia at one end and the caudal (posterior) side of the lateral femoral condyle at the other end. It also helps to prevent the stifle (knee) joint from over-extending or rotating.

TTA XrayTrauma to the equivalent ligament in humans is common, and damage most frequently occurs during some form of sporting activity (including football, rugby, and golf). The nature of the injury is very different in dogs. Rather than the ligament suddenly breaking due to excessive trauma, it usually degenerates slowly over time, rather like a fraying rope.

In the vast majority of dogs, the cranial cruciate ligament ruptures as a result of long-term degeneration, whereby the fibres within the ligament weaken over time. We do not know the precise cause of this, but genetic factors are probably most important, with certain breeds being predisposed (including Labradors, Rottweilers, Boxers, West Highland White Terriers, and Newfoundlands). Supporting evidence for a genetic cause was primarily obtained by assessment of family lines, coupled with the knowledge that many animals will rupture the cranial cruciate ligament in both knees, often relatively early in life. Other factors such as obesity, individual conformation, hormonal imbalance and certain inflammatory conditions of the joint may also play a role. Uncorrected cranial cruciate ligament deficiencies have been associated with meniscal damage and degenerative joint diseases such as osteoarthritis. 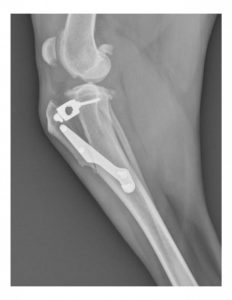 TTA is a surgical procedure designed to correct cranial cruciate ligament deficient stifles. The objective of the TTA is to advance the tibial tuberosity, which changes the angle of the patellar ligament to neutralize the tibiofemoral shear force during weight bearing.

By neutralizing the shear forces in the stifle caused by a ruptured or weakened cranial cruciate ligament, the joint becomes more stable without compromising joint congruency. 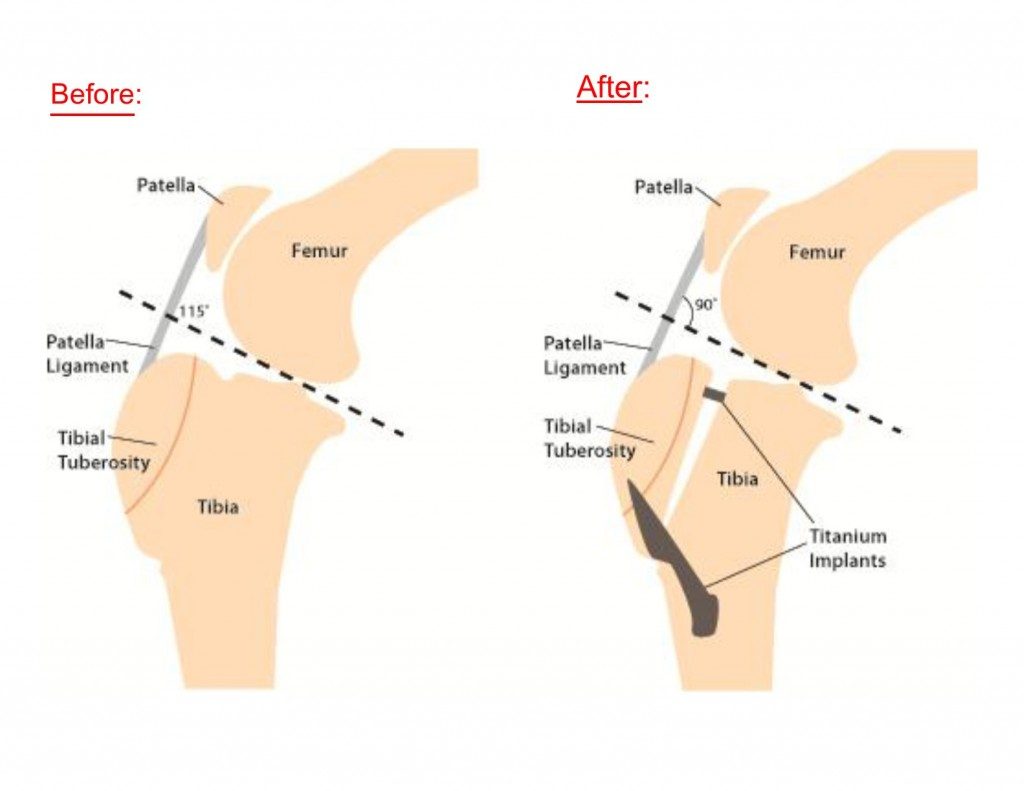 TTA appears to be a less invasive procedure than some other techniques for stabilizing the deficient cranial cruciate ligament such as Tibial Plateau Leveling Osteotomy and Tibial Wedge Osteotomy, as TTA does not disrupt the primary loading axis of the tibia.

When the ACL tears in your pet’s knee, the tibia is able to slide forward when your pet stands on the leg, which is normally constrained by the torn ligament. This is very painful and causes arthritis in the joint. TTA works by changing the way the quadriceps muscle (the large muscles on the front of the leg) pull on the tibia. After a TTA, the muscle pulls the tibia back into its normal position when your dog stands on the leg.

The first step in the process would be to schedule an orthopedic consult appointment. X-rays may be brought along to this appointment, or digital x-rays can be done at our hospital. We will also do pre-
op blood work at this appointment.