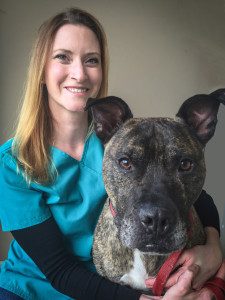 Did you ever watch The Price Is Right?

The phrase “Help control the pet population: have your pet spayed or neutered!” was said by Bob Barker at the end of every episode, for decades.

Shelters around the country will very often only put animals up for adoption once they‘ve been spayed or neutered, or will require adopters to have the surgery done once the animal is of age if it’s too young at the time of adoption.

Veterinarians around the world advocate for all non-breeding pets to be sterilized, and with the advancements of medicine are able to perform these sterilization surgeries with low complication risk. What exactly does spaying and neutering entail? What are the benefits of these major surgeries?

Spaying, also known as an ovariohysterectomy (OHE), is the surgical sterilization of a female where the uterus (which is split into two tubes, called horns, instead of one organ like in humans) and ovaries are completely removed through an incision in the abdomen. Normally the surgery takes between 30 and 60 minutes. Kittens and puppies are spayed around 6 months of age, usually before their first heat cycle.

Spaying provides many health benefits, one of the biggest being reducing the risk of mammary and uterine cancers. In a study of female dogs, those that had been spayed before their first heat cycle were at a near zero percent chance of developing mammary cancers! Even in older animals that have had many heat cycles, spaying at a mature age still helps to decrease the risk.

By removing the ovaries along with the uterus, there are no longer hormones being released into the body from which the cancers develop. Another major health benefit of spaying is eliminating the possibility of an infection in the uterus called pyometra. When this infection occurs it can very quickly become life-threatening to your cat or dog and often requires surgical intervention to remove the infected tissue, a few days of hospitalization, and ultimately can be a hefty financial responsibility.

When animals are spayed at a young age, especially those who have not yet had a heat cycle, they have a significantly lowered instance of bleeding during surgery due to the lack of mature blood vessels in the reproductive organs. This, coupled with the availability of surgical lasers and post-operative therapy lasers, allows for a less painful recovery and lower chance of post-operative complications.

Spaying, while still a serious operation and not one to be taken lightly, is of great benefit to our four-footed female friends.

Seen below: The ovaries (held by clamps in the first picture) and uterine horns of a female dog. 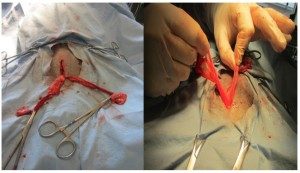 Neutering, the surgical removal of the testicles, is less invasive than a spay surgery but no less important to the health of male pets.

Neuter surgeries are performed by making a small incision between the scrotum and base of the penis and removing the testicles.

The surgery takes between 20 and 30 minutes. Most neuters are performed on animals around 6 months of age, when the majority of their growth and physical development is completed.

Like spaying, there are a number of health benefits that are seen when these pets are neutered. The risk of prostate and testicular cancers is reduced to almost zero percent in those that are neutered. Undesirable behaviors that are exhibited by intact male dogs, like marking, mounting, and roaming, are also significantly decreased if not totally eliminated. When an intact male dog smells a female dog that is in heat, his instinct is to go find her to breed with her.

Unfortunately this also leads to lost dogs or ones that are hit by cars. Intact male cats will often spray urine on horizontal surfaces to mark them as their own, including walls and furniture. The pungent aroma and stain it leaves behind are often traits owners cannot live with, but by neutering the cat the behaviors often are gone within a very short period of time. Aggressive behaviors in both species can also be markedly improved when an animal is neutered.

As workers in the veterinary field, we often see animals with health issues, both major and minor, that could have been prevented through spaying or neutering. Here at Neffsville Veterinary Clinic our exceptional team of doctors has decades of collective experience performing spays and neuters, and perform these surgeries every day.

When here for any surgery your pet is closely monitored by one of our experienced nurses both while they are awake and under anesthesia, and often are unaware any procedure ever happened. By choosing to spay or neuter your furry family member, along with having regular wellness visits and vaccinations, you are giving them the best possible chance at a long, healthy life!